A Haunting We Will Go

One minute we were watching a moment together, and the very next minute, he was gone. I don’t even remember closing my eyes, but closed they had been, or I would have known when he had disappeared, or who had taken him.

The other odd thing was, that the theater was completely empty, not a soul to be seen in a hall which was packed when the movie had started. Admittedly, it had been a bad movie, but it couldn’t have been that bad that everyone had left together, could it?

Scratching my head, tripping over empty chairs, bumping into dark pillars, I somehow made my way out of the hall. I was sure there was a logical explanation to this mystery, and I would get some clarity through the staff in the lobby. The only problem was, the lobby too was entirely empty. 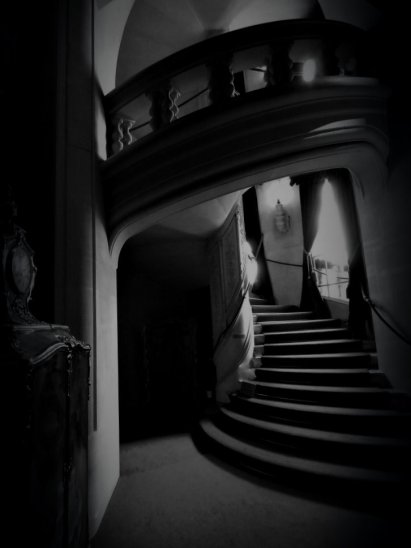 I froze in terror as I looked at the spooky interiors of the lobby. Wasn’t it bright and cheerful, full of hustle and bustle when we had arrived? This was getting spookier by the minute.

It was then that I saw the Grandfather clock on the ancient-looking mantle.

It seemed oddly out of place in a theater lobby, so I decided to investigate further. I started by looking over it very carefully from all sides, touching mysterious objects was a definite no-no in my dictionary. But I couldn’t be too circumspect, I was really worried about him now. God only knows what perils he would be facing alone, without me at his side to protect him.

And then I saw the lever at the bottom of the clock, a the point at which the clock seemed to be joined to the mantle. Very very carefully, I pressed the lever….and suddenly, the doors of the old cupboard beneath the clock opened up with an eerie creak.

I peeped inside very cautiously.

There was a tunnel going inside, to God knows where. It was dark, but lit intermittently through some dim, flickering bulbs. No way was I going to enter the tunnel on my own. This was just the kind of idiocy that got heads cut off in those slasher movies that he was so fond of taking me to, even though they scared the hell out of him, and irritated me no end because of their lack of logic.

And it was then that I heard him, from deep inside that tunnel, and I knew that I would have to break my resolve of not entering obviously dangerous places, yet again, and rescue him, yet again.

For even though his voice was distant, and weak, my razor-sharp ears could easily make out what he was shouting. The same thing that he always shouted whenever he got into trouble, which was a lot more times than you would imagine. In his sing-song voice, he was screaming plaintively – “SCOOBY DOO, WHERE ARE YOU?”

28 Responses to A Haunting We Will Go