They called him The Whistler.

No one knew where he came from, or when. All they knew was that he whistled beautifully, especially when he saw a beautiful woman passing by. But most people took it in good spirit. After all, he was just a bird.

Most people…but not all.

One day, The Whistler saw a huge cavalcade of chariots, elephants and camels approaching the tree on which he was sitting. It was none other than the Crown Prince John, returning to his Crystal Palace after receiving a very important dignitary at the port- Maria, the Princess of their neighbouring kingdom, and the one he hoped would be his future queen.

She hadn’t said yes yet, for the simple reason that he hadn’t been able to gather the courage to ask. But he intended to correct that during this trip. He was sure she wouldn’t be able to resist the charms of his magnificent Crystal Palace.

As the cavalcade passed beneath The Whistler’s tree, he saw Maria for the first time, and it was like being stuck by lightening. He was stunned by her incomparable beauty, and just kept staring at her as if frozen. And then…almost by themselves, his lips puckered up, and he whistled like he’d never whistled before. It was music at its most musical, like the wind blowing between mountain peaks as it entered the valley, or the sound of the trees in a forest on a quiet winter morning. It was the music of love, and it flew from The Whistler’s lips, directly to Maria’s heart.

And just like Wordsworth’s heart leaped up when he beheld a rainbow in the sky, so did Maria’s upon hearing the music of The Whistler’s whistle. She was in love.

“She is in love,” thought Prince John to himself, “But with the wrong man…actually, the wrong species.” The green-eyed monster attacked him with a vengeance, and he swore that come what may, he would get rid of this new competitor for the princess’s affections.

As soon as they reached the Crystal Palace, the Prince John showed Maria to her Royal Chambers, and asked her to rest awhile. But he would find no rest till he took care of that whistling creep. So, he called the General of his Army, and said, “I have a very important task for you. I’ve discovered a sinister plot against the crown. You must put it down ruthlessly.”

The General saluted smartly and said, “Just tell me who it is, O Prince, and it shall be taken care of.” The prince replied, “It is that whistling bird on NH8.” The General was stumped. “Pray continue, Sir?” he ventured finally, hoping that this was just the beginning of his directions. But John replied curtly, “That’s it. The Whistler is plotting against us. I need him banished from the kingdom.”

Hoping that the current king continued living for at least fifty more years, or at least till his own retirement, the General took his leave dutifully, to turn the full might of his armed forces on a bird!

A team of elite commandos was dispatched to The Whistler’s tree. Since guns were not invented yet in those days, the commandos usually operated with swords. But swords could not reach the high branches of the tree. So, they resorted to the use of the most potent long-distance weapons in their arsenal- catapults.

The Whistler was taking his afternoon power nap when his siesta was suddenly disturbed by loud noises and vibrations. He opened his eyes to see a virtual hailstorm of stones being thrown at him by an entire unit of men in black. He had no option but to take an ungainly flight out of the tree, and start hovering at a point where the missiles couldn’t reach him. He was seething with anger, for he knew who was behind it, and now he had only one thing on his mind- vengeance….OK, make that two things- vengeance, and Princess Maria!

Two days had passed since that incident. No one had seen The Whistler in that period, so Prince John was sure that the General had succeeded in his mission. He decided that today would be the day that he would finally propose to princess Maria. He had not met her since her return, giving her time to relax and recuperate from her journey.

All the arrangements had been made. The glass dome of the Crystal Palace had been cleaned inside out, and everything was sparkling in the morning sun. The prince reached Maria’s chambers and knocked gently on the door.

After what seemed like an eternity, Maria opened the door. He saw her…..and kept looking….her face was glowing. She was looking even more beautiful than before, if that was possible.

After five minutes of standing still like a statue, he finally found the courage to speak, and said, “Maria, I have something to tell you.”

That brought a huge smile to Maria’s face, and she replied, “Wow, what a coincidence, there’s something I need to tell you too.”

As was the norm in those days, a half-hour of ‘Pehle aap pehle aap‘(You first, you first) followed, till the prince got frustrated and said, “OK, I’ll go first. Maria, I am in love.”

Maria’s reaction to this statement was a red blush that covered her face entirely, not leaving even an inch of space. She replied softly, “So am I John.”

Prince John was elated, ecstatic, elastic…OK, scratch the last one, but you get the picture. He steeled himself and said, “And the one I am in love with is in this room right now.”

Maria blushed even more, and said, “The one I am in love with is ALSO in this room right now!”

And as the blinded-in-love Prince John rushed to hug Princess Maria, she moved away from the door, and pointed towards the Couch….on which was sitting….The Whistler.

“Two days ago, he came and sat on the glass roof of my chambers, and started whistling soulfully,” said Maria, “I tried to resist him as much as I could, but looking at his cute little face 24/7 and hearing his whistle finally melted my heart, and I let him in. He’s been living with me since then. Will it be OK if we get married in this gorgeous Crystal Palace of yours? After all, this is the place which led to us falling in love.”

And as Prince John’s face turned from red (with love) to white to red (with fury), The Whistler looked at him with style from the couch and said, “Johnny, jinke apne ghar sheeshe ke hon, woh doosron par paththar nahin phenka karte!” (Those who live in glass houses, should not throw stones!) 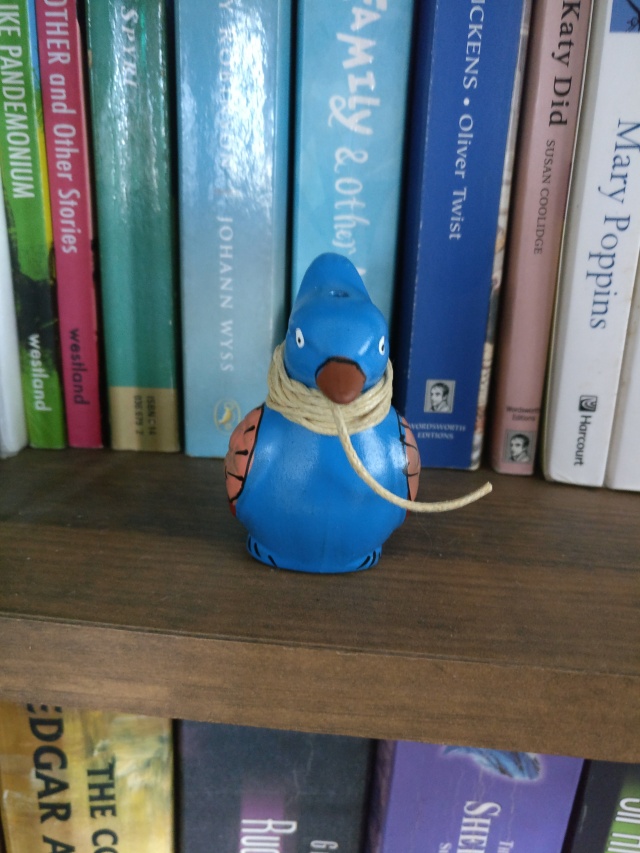 At the age of 40, I decided to exit the corporate world, and enter the world of stories as a full-time writer. Wish me luck!
View all posts by anuragbakhshi →
This entry was posted in Uncategorized and tagged Birds, Humour, Love, Nonsense, Quirky, Relationships. Bookmark the permalink.

2 Responses to The Whistler