Trip to Turkey Day 2- A Skirt for Swati #TurkishDelight

Posted on November 14, 2018 by anuragbakhshi

Our first full day in Istanbul started off on a glorious note- it was bright, sunny, and the Bosphorus seemed to be inviting us to come pay a visit. 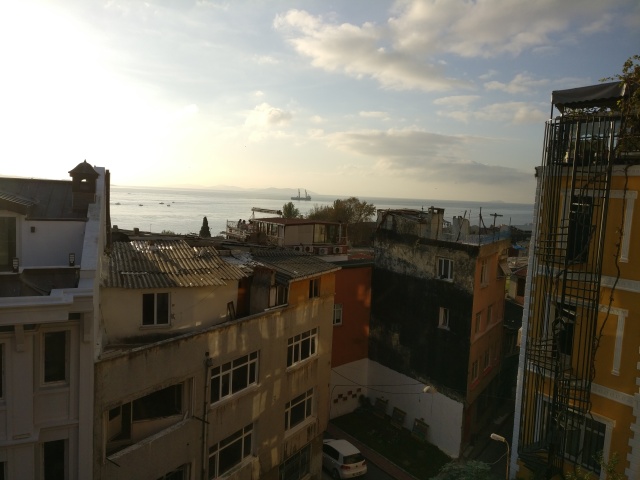 However, we had other plans for the day, apart from a long, leisurely breakfast, that is.

Today was the day for the two iconic and imposing domes that loomed over the city- the Blue Mosque and the Hagia Sophiya. If only we had known what was in store for us, maybe we would have taken up the Bosphorus’s invitation after all.

Ever since we met her again at breakfast, Swati had been repeating the same thing again and again, like a parrot whose tape is stuck..or is that a tape? Anyways, the point is, that she pointedly kept saying that this was the day when she would get the most exclusive skirt in the world. It was, apparently (for though it might be difficult to believe, I am a fashion noob), to be found only in Istanbul. We thoroughly encouraged her, saying that we would go wherever we had to in order to get our hands, wait, that doesn’t sound right, let me rephrase that, in order to help her get her hands on her skirt.

Our first stop was an under-construction building, covered with scaffolding and tarpaulin, much like any building in Mumbai during the Monsoons. This, it turns out, was the legendary Blue Mosque. “But this is not blue at all!” everybody spoke up in chorus. “Well,” I said, trying to show-off my limited knowledge of the city, since I was the one in-charge of planning the itinerary, “it’s blue from inside, as you will soon see. Also, maybe the paint has faded a bit due to the rains. That is why the tarpaulin. You people also na….”

After waiting in a long queue, we finally got to enter the Mosque. And when I say, we, I mean everyone except Swati, for she was stopped at the gates by the Fashion Police. And so, we came out again and waited for her to change. Within a few minutes, she was back, now dressed in a skirt that she had rented from the Mosque Help Desk. 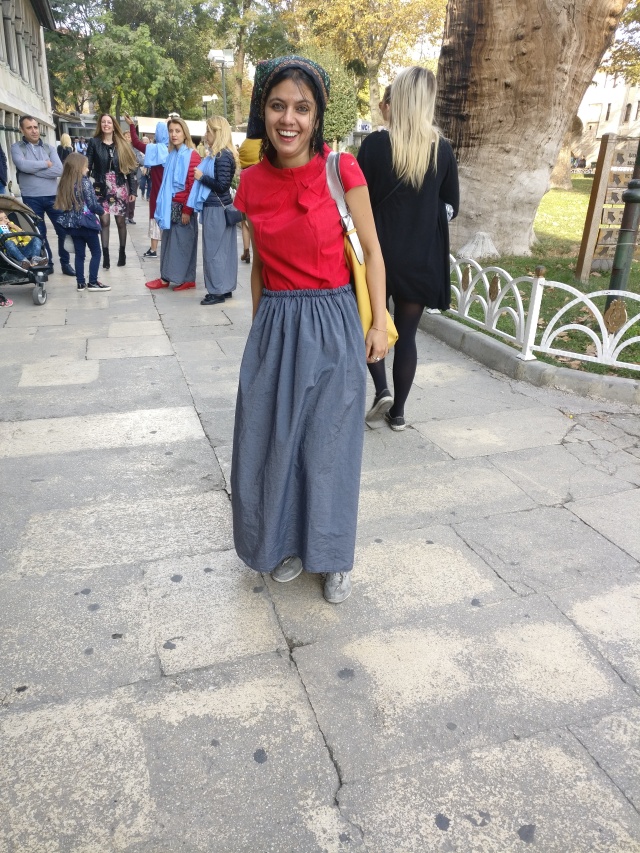 The Blue Mosque, thankfully, turned out to be blue from the inside, saving a bit of my reputation as a result. And within no time, we were out, and rushing towards the Hagia Sophia, as we had a lot of ground to cover this day.

Throughout our short walk to the Hagia Sophia, as well as the time we spent inside, we had a strange feeling…as if people were watching us, and not in a ‘Who are THESE people?’ way, but in a ‘Who ARE these people?” way. We kept wondering as to what could be the possible reason for the same. It was then that Swati stopped in front of an alcove, and said, “I’ll quickly change and come.” 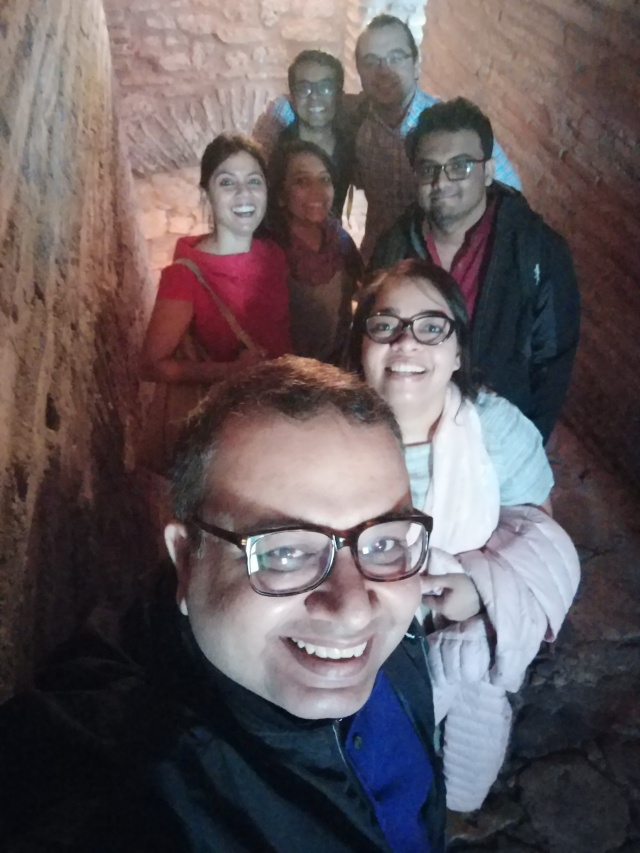 And BAM! We finally realized why people had been staring at us. Swati had coolly walked off from the Blue Mosque wearing the same skirt that she had rented, the most exclusive skirt in the world, one which could be found only in Istanbul, at the Blue Mosque to be precise.

Before we could recover enough to express our shock, or to admonish her, Swati had crawled into the alcove, and while we gave her cover, attempted to change back into her own skirt. Seconds turned into minutes, and minutes into hours, but Swati did not come out. Terribly concerned about her now, we turned around and shone our camera torches into the alcove. And it was then that Swati sheepishly admitted, “Guys, I think I’m stuck here.” 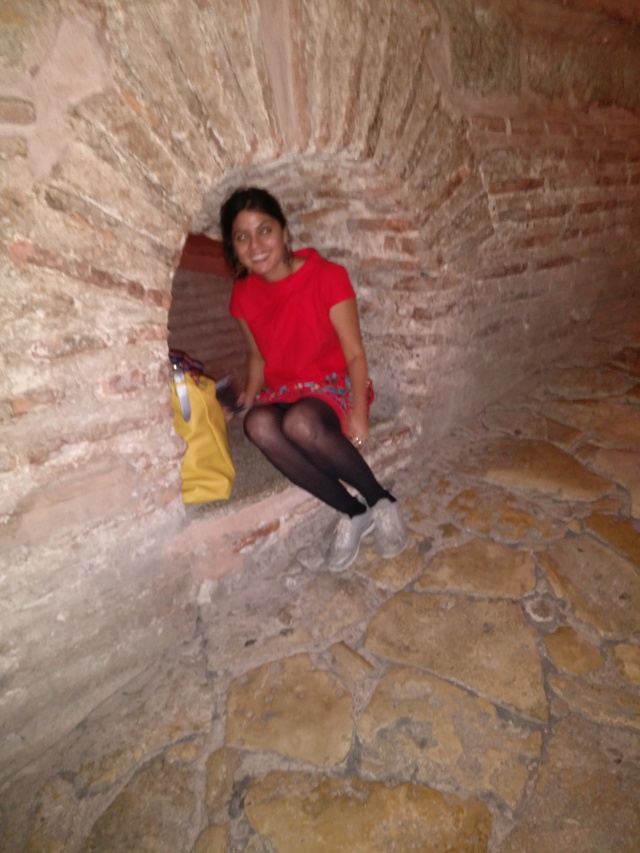 We were devastated by this dire development. The alcove was too narrow and too deep for any of us to attempt a rescue, and we couldn’t possibly approach the authorities in fear of them arresting Swati for pilfering a national treasure. This was a ‘dikkat’ (Problem in Hindi) that we had never imagined we would find ourselves in, and all our faces fell as we tried desperately to think of a way out.

Suddenly, Medha remembered something, and said, “Guys, I know what we need to do. Come with me.” Unable to think of a valid objection, and frankly, with nothing better to do, we followed her as she led us out of the museum, and into the Basilica Cistern and its dark, damp passages. Finally, she stopped near a pillar, and pointed towards its base. 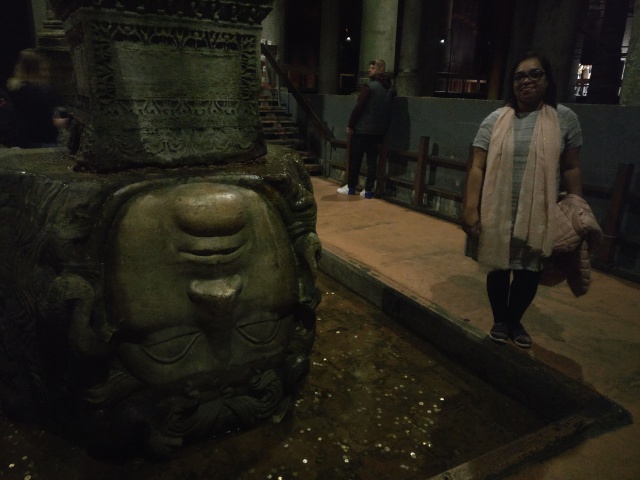 We looked at it closely, only to discover that it was the head of Medusa, the Snake-Goddess. “This is the head of Medusa, the Snake Goddess,” Medha said pedantically, as if she was back in her class, or she was Robert Langdon from Inferno. “She rules over all narrow, dark, hidden passages, much like the one Swati finds herself stuck in. So let’s pray to her and ask for her help,” Medha concluded.

Being Indians, we were all firm believers in the power of prayers, since oftentimes, that was the only thing between us and certain disaster. So we sat on the ground, and started praying fervently for our friend’s safety…for all of five seconds, when Pratik bounced up from the ground like a Jack-in-the-box and said, “I can’t do this. The floor is too cold and damp, it seems as if we are sinking in a swamp!” Pratik, as you might have guessed by now, loves his rhymes just as much as he loves his hyperbole.

But his feeling was shared by everyone, and with one last withering, disappointed look at Medusa, we walked out of the Cistern. We were running out of options now, and started walking around on the streets like headless chicken, just before they get grilled for being served to Pratik.

It was then that Thakkar saw something and abruptly stopped in his tracks, causing all of us to bump into him, and each other. “We are such idiots,” he remarked with a loud sigh. “I absolutely agree,” Jiggy quipped, unable to resist, “but in what context are you saying that right now?”

Despite our stressed-out condition, everyone broke into loud guffaws at her use of the ‘C’ word (Inside joke alert!) and when the laughter had died down, Mitesh pointed towards a majestic figure and said, “THIS is the real Goddess of Istanbul. We should be praying to her, not Medusa.”

And when we saw that Goddess, we knew that Mitesh was right, and if anyone could save Swati, it was only her. The only problem was, she was fast asleep.

We tried calling out to her, nudging her, even shaking her violently(with our hearts in our mouths) but she just refused to get up from her afternoon siesta. It was then that I had a brainwave, for a change, and much like Archimedes, who had shouted Eureka all over the streets and became famous as a result, I shouted, “Kumbhkarn!”

“WHAAAATTTTTT????” everyone reacted in the same ‘He’s finally gone crazy, it was only a matter of time’ tone.

I ignored the insulting expressions and explained, “In the Ramayana, Kumbhkarn, Ravana’s brother, had got a boon/curse(depending upon the context, He He) that he would be able to sleep for six straight months at a stretch, and no one would be able to wake him up during that period. But when Ram’s army had attacked Lanka, Ravana was forced to turn to Kumbhkarn for help. Unable to wake him up despite all the tricks that he could muster, he ordered gallons of delicious food to be prepared and the barrels and cauldrons brought under Kumbhkarn’s nose. Kumbhkarn couldn’t resist the smell of food, and so was forced to wake up….and died within a few hours at Ram’s hands.”

“That we arrange for the favorite food of cats, so that the Cat Goddess wakes up immediately,” I replied.

“But what is their favourite food, and how do we know what it is?” Pratik asked with a confused expression.

Medha’s face lit up, as she replied with a swagger, “You obviously haven’t watched Garfield-The Movie 3798 times, or you wouldn’t be asking this question. The favourite food of all cats is Lasagna, the food of Gods.”

And so it came about that all available hands got on to all available phones and started calling up various Italian eateries in Istanbul desperately.

However, our search was in vain, as lasagna turned out to be a dish alien to the Turks.

“What about some other Italian food, like say…Pizza?” Thakkar finally spoke up when all of us were sitting down dejected after our fruitless, or lasagna-less search.

“Could work, what’s the harm in trying,” said Jiggy, and made one last phone call.

And lo and behold, within 30  minutes, the Pizza had arrived, and as expected, its aroma woke up the Cat Goddess, who then proceeded to polish the entire thing off in three seconds flat.

She then took a loud and prolonged burp, and said, “Yum-Yum! Now tell me, what do you want children?”

We quickly, and succinctly (though it is tough to believe, I know, with my rambling story-telling) narrated our woes to her, and within a few moments, Swati was back with us, wearing her original red skirt.

We thanked the Cat Goddess, and then painted the town red, yellow, and purple for the rest of the evening. 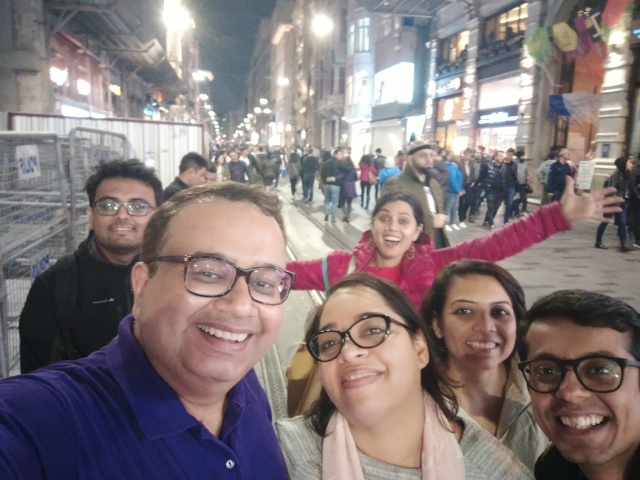 When we finally called it a night at 6:30am, Swati thanked us all for our efforts, and with glistening eyes, said, “I should not have taken that skirt. Mujhse bahut bada Galata ho gaya!”

We took a few moments to decipher that cryptic comment, and when we finally managed to do so, we laughed so hard that the Cat Goddess had to come again and Sshhh Shhhh us, telling us strictly to not disturb her sleep.