The Frost Giants vs. The Whale

Tens of thousands of years ago, the Frost Giants ruled over the lands beyond the Arctic Circle. They were cruel, they were ruthless, they ruled with an icy fist….and then, they disappeared. Some say they were finally vanquished by Odin and his sons, others think it was some mysterious disease, or a meteor. But no one knew the real reason behind their disappearance…till now.

Anne was just a few months old, but to her mother and father, it seemed like they’d not even existed before she was born. Round as the sun, and just as bright and warm, skin so glossy that everyone called her the Mirror Whale, for, you see, Anne was a baby whale, who lived in the crystal-clear waters near Tromso.

They were the happiest of families. After giving birth to Anne, her mother and father decided that they did not want to divide their love and attention, so they decided not to have any more kids. Even at such a young age, Anne realized what a huge sacrifice her parents had made for her, and it just increased her love for them even more.

Anne’s heart was as pure as the waters in which she frolicked around all day, and she went out of her way to help any creature of the sea who needed her help. She loved everyone, and everyone loved her. Except for the Frost Giants.

The Frost Giants hated the very concept of love, for they knew that love led to warmth that could melt the most frigid of hearts, and so, to protect their rule, and their way of life, they crushed every dream of love before it could even take birth.

And so, when they came to know about Anne, and her love for all living beings, they decided to make an example out of her.

Anne was swimming with her friends, the mermaids, when a dolphin rushed up to her, panting, in a real state, and said, “Anne, come quickly, the Frost Giants have attacked your home.” Anne was horror-struck, she knew that neither she, nor her parents had ever harmed anyone, so why would the Frost Giants attack them?

She swam furiously through the rapidly freezing waters, for the entry of the Frost Giants froze everything that they came in contact with, praying that she would reach in time, that it was just a rumour, that it was just a dream, and her mother would be waiting at the door of their home with a snack of salmon, and her dad would have got a new toy for her…..but all her wishes and all her prayers could not change the harsh reality….She reached home to find that her warm, little home was no more, and her parents, who had sacrificed so much for her happiness, lay on the floor of the sea in tatters.

Odin, Dovregubben and Laufey waited for the wailing to stop, but it just went on and on. And soon, the Frost Giants on the streets started melting and shrinking in size, the trolls, in their mountain caves, started crumbling, and the Gods in Asgard started tumbling towards the earth. But the wail would not stop.

And so the kings of the three races, Odin, Dovregubben and Laufey rushed to the sea where Anne was wailing, and begged her to stop. But how do you get a broken heart to stop crying, how do you get shattered dreams to join back together? Anne kept on wailing, and now, even the three kings, despite all their powers, were starting to feel the effects of the whale’s wail.

And now Odin approached Anne tentatively, kept his hand gingerly on her head, and said in a loving tone, “Child, if you want, I and Dovregubben will vanquish each and every Frost Giant in all the three worlds, together we have enough power to do that. But please stop crying.”

On hearing this, Anne stopped for a few moments, and said, with giant tear-drops in her eyes, “That exactly is the problem, O great one, even now, you are talking about killing each other. It is hatred like this that killed my mother and father. I just want this meaningless fighting, this killing, this hatred, to end.”

And the three kings just looked at each other in amazement. They were the ones who were supposed to be old, and wise, and a baby whale, whose parents had just been killed, wanted to forgive their killers! Now there were tears in their eyes too.

And what about Laufey, the king of the Frost Giants? He heard all this, and his cruel, icy heart started melting, along with the rest of his huge body. For the purity of the little whale’s love had generated so much heat, that no heart of ice could withstand its warmth. And so Laufey melted, but with a smile on his face, for he knew now, that what he and his people had feared, pure love, was not their enemy, but the only thing that gave meaning to life.

And he melted away, into the Arctic Ocean, and so did all the Frost Giants in the world, and they formed a crystal clear blue sea of their own, with mountains inside the sea, images of which could be seen above ground too.

And then the Troll King Dovregubben placed his rocky hand on Anne’s head, and said, “The Frost Giants understood that they were wrong in hating love, and so now, they will live beneath this sea, and spread peace and joy. And Odin and I promise you, little one, that till the day people on earth recognize the power of love, the waters of this sea of Frost Giants will remain pure and transparent. But on the day that people start killing each other without reason, and love is again seen as an enemy, the Frost Giants will rise again, and then, no one will be able to stop them from ruling earth.”

And Anne finally stopped her wailing then, and smiled a sad little smile. The sacrifice of her parents had not been in vain after all. The love which they had all believed in so strongly, had finally won.

And today, when tourists take selfies against these icy blue waters, they do not realize that beneath it lurks a world of Frost Giants, just waiting for human cruelty and stupidity to cross a certain boundary, so that they can be resurrected, and can rule once again. 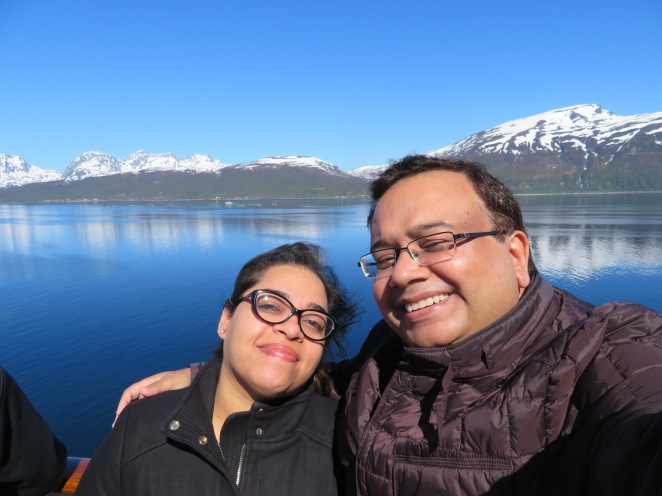 Narrator’s Note: My regular readers already know this, but a disclaimer always helps- This story is made up be me, and has no connection at all to authentic Norse mythology. It is my take on what could have been!